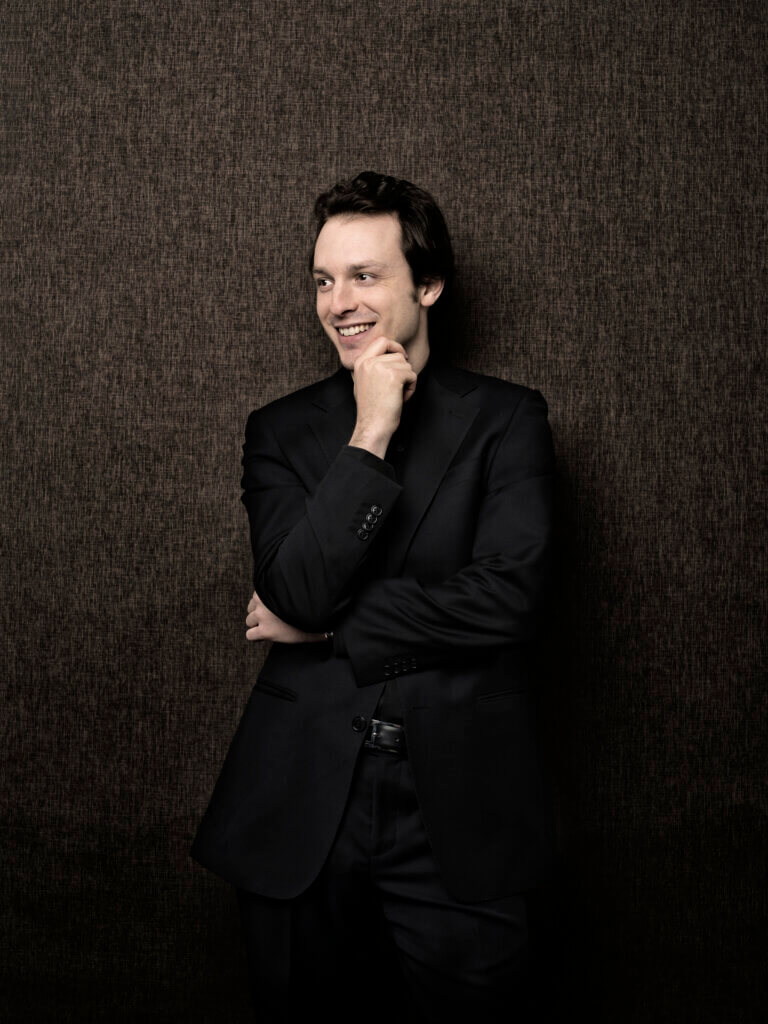 Victor Aviat launched his international career as a finalist of the Nestlé and Salzburg Festival Young Conductors Award in 2014. Since then, he has won praise for a series of debuts with major orchestras. In the past two seasons he has gained experience of a broad repertoire as well as the different aspects of everyday orchestral life through his position as Young Conductor in Association at the Bournemouth Symphony Orchestra. In addition to his regular concerts, he seized the opportunity to step in at short notice for Vassily Sinaisky, leading a brilliant performance of Shostakovich’s 5th Symphony. In the 2019/20 season Victor Aviat conducted a project with the Zafraan Ensemble and KNM Berlin as well as concerts in Ankara. Previously he returned to the Bournemouth Symphony Orchestra, and made debuts with the Royal Philharmonic Orchestra, the Orchestre national des Pays de la Loire, the Sinfonia Lahti as well as the Orchestre d’Auvergne. He had also been invited back to conduct the Aarhus Symfoniorkester. He has also made guest appearances with the Orchestre Philharmonique de Luxembourg, Orchestre National de Montpellier, Konzerthausorchester Berlin, Orchestre National de Lille, Orchestre Symphonique de Bretagne, Bern Symphony Orchestra, and the Bilkent Symphony Orchestra. Additionally, he gave a series of concerts with the Budapest Festival Orchestra, where he was formerly Assistant to Iván Fischer. He attracted much attention for his work in a production of Offenbach’s lost opera Le Roi Carotte. Working together with director Laurent Pelly and publishers Boosey & Hawkes, Victor Aviat led this restored opera at the Opéra de Lyon, from where it was broadcast on television and radio. The production was very well-received by European critics and was named Best Production of a Rediscovered Work at the International Opera Awards 2016.

Victor Aviat studied oboe, piano, organ and composition in Paris, Geneva and Zurich. He decided to devote himself to a career in conducting in 2009, encouraged by Franz Welser-Möst. As an oboist he played with the Berlin Philharmonic, Lucerne Festival Orchestra and Zurich Opera House. He keeps being the Principal Oboe of the Budapest Festival Orchestra and plays regularly with free ensembles such as Chamber Orchestra of Europe or Orchestra Mozart.  Victor Aviat studied conducting with Professor Ulrich Windfuhr at Leipzig University of Music and Drama, and Professor Johannes Schläfli at Zurich University of the Arts. Whilst studying, he founded Orchestra Zurich, a project orchestra that draws together musicians from the Zurich Tonhalle Orchestra, Zurich Opera House Orchestra and Zurich Chamber Orchestra, focused on programmes based around the First and Second Viennese Schools. During this time he worked closely with Claudio Abbado, Nikolaus Harnoncourt, Emmanuel Krivine and Iván Fischer – four musicians who actively supported his development as a conductor, and musically influenced him in their own ways.

As a composer Victor Aviat makes his first step end of 2019, with a request of the Orchestre National de France, to write an entertainment piece for the new year concert. Since then Aviat is writing in different forms, symphonic as well as songs and film music where he is focusing much of his energy lately.