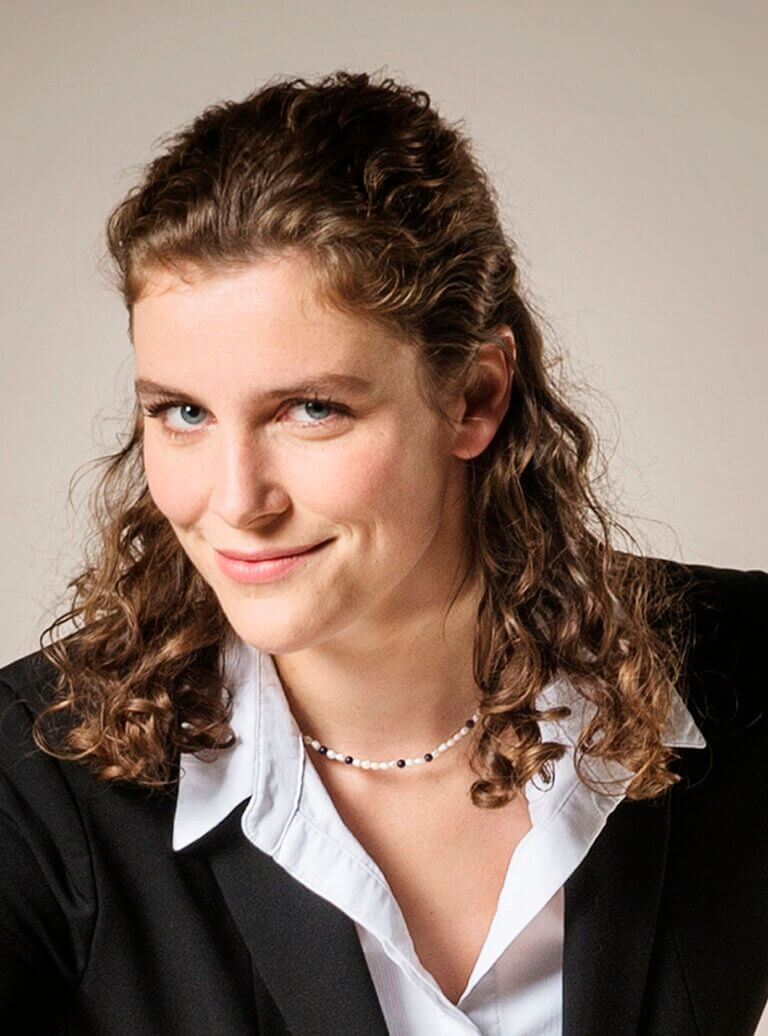 Corinna Niemeyer was appointed Artistic and Music Director of the Orchestre de Chambre du Luxembourg in September 2020. This follows a two-year tenure as Assistant Conductor with the Rotterdam Philharmonic Orchestra in 18/19 and 19/20.

​Corinna’s enthusiasm for conveying music in innovative ways, combined with an in-depth approach to all the repertoire she conducts, is reflected in the breadth of her activities, which include period music ensembles, contemporary premieres, cross-disciplinary projects, opera, as well as mainstream symphonic projects. She has established a reputation for her ability to connect with audiences of all age groups and for her creative approach to presenting concerts.

Highlights of the 2020-21 season included her debuts with Orchestre de Paris, Orchestre Philharmonique de Radio France, Orchestre National des Pays de la Loire and Ensemble Modern amongst others. Corinna has also continued her association with the period orchestra Les Siècles as part of the ensemble’s Beethoven anniversary projects, and in February 2022, Corinna makes her Opéra de Lille debut with the orchestra for Ravel’s L’enfant et les sortilèges on period instruments.

​Corinna is making her mark as an opera conductor and at the beginning of the 2021-22 season will make her debut with Opéra de Metz, with Rossini’s Le Comte Ory. She also conducts Viktor Ullmann’s one act opera Der Kaiser von Atlantis at Grand Theatre de la Ville de Luxembourg, which features in a double-bill with a world premiere by Eugene Birman about the European Human Rights Convention.

​Corinna’s first season with the Orchestre de Chambre du Luxembourg reflects her innovative approach to programming. Highlights include: investigating societal relationships of battle, sympathy and cooperation by combining Biber’s Battalia, Saariaho’s Terra Memoria and Frank Martin’s Petite Symphonie Concertante for two orchestras; showcasing rarities like Marianna Martines’ cantatas in combination with the Surprise Symphony, composed by her housemate Joseph Haydn; works by composers of the “Roaring Twenties” such as Poulenc, Milhaud and Ravel.

​Corinna completed her training as a conductor at the Hochschule der Künste Zürich and previously studied orchestra conducting, cello and musicology at the conservatories of Munich, Karlsruhe, and Shanghai. She has won awards from a number of international conducting competitions, including Tokyo International Conducting Competition in 2015, and Talent Chef d’orchestre in Paris in 2014.

​Since 2012 she has enjoyed close collaborations with Francois-Xavier Roth, assisting him in his work with the SWR Symphony Orchestra Baden-Baden and Freiburg, Cologne Opera and “Les Siècles”. This included major projects such as Berlioz’s Les Troyens at the Festival Berlioz in La Côte-Saint-André, and contemporary programmes for Musikfest Berlin. Over the years she has also worked as an assistant to Ivan Fischer, Lahav Shani and Yannick Nézet-Séguin.

During her studies, she was Artistic Director of the Orchestre Universitaire de Strasbourg, establishing the orchestra as one of the most active university orchestras in Europe. She was awarded the “Prix de l’Amitié franco-allemande” in 2018 by the German Consulate General in Strasbourg for her cross-border cultural commitment. From 2016 to 2018, she was lecturer and principal conductor of the orchestra at the Sorbonne University in Paris.She also regularly conducts the children’s orchestra (DEMOS) at the Philharmonie de Paris.