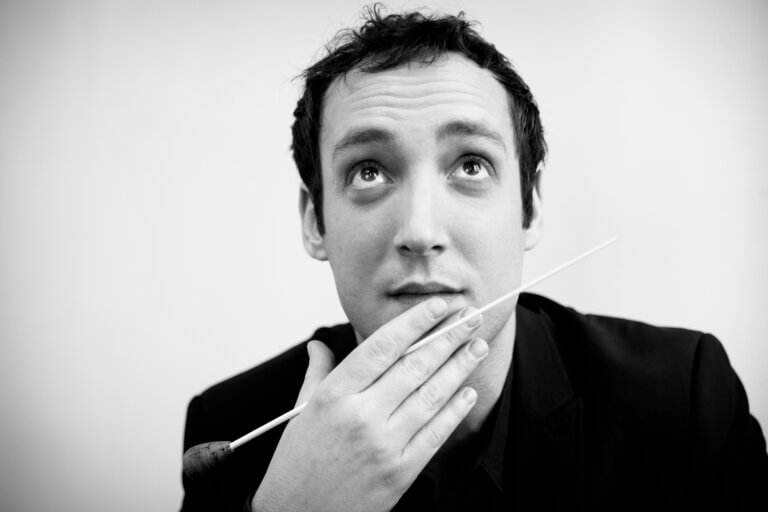 «I boil, I burn, I catch fire!»: this quote from Labiche’s A Young Man in a Hurry perfectly encapsulates Antoine Glatard’s personality. This young French conductor has a contagious energy and enthusiasm, a meticulous but truly imaginative musical language, and a will to share an extensive lyrical and symphonic repertoire with all. He brings a breath of fresh air to the new generation of classical musicians.

Antoine Glatard was the musical director of the Orchestre National de Lyon Youth Orchestra for three seasons, during which time he conducted numerous concerts in the Rhône-Alpes region.

Semi-finalist in the 2018 Malko Competition for Young Conductors, he was also awarded the Second Prize at the First Hong Kong International Conducting Competition in January 2018 as well as the Third Prize in Fondation Polycarpe, concours international de chefs d’orchestre d’opéra, Liège (August 2018).

As resident conductor of the Orchestre National de Lyon from September 2015 to January 2017, Antoine Glatard conducted the new year program (Rêves de cirque – Dec. 2016), the opening concert of the Philharmonic Foundation alongside Roger Muraro (Ravel-Beethoven), the musical tale Peter Pan (Olivier Penard), given at the Auditorium.
In 18-19 he returns to Lyon for an open concert (Beethoven 5, Dvořák Slavonic Dances), the presentation of the season 2019-2020 and a series of concerts (Dutilleux, Ives, Escaich, Ligeti).

He was also young associate conductor of the Opéra de Rouen-Normandie during the 2016/17 season, where he conducted the orchestra at multiple concerts but also assisted the operas Cosi fan tutte, The Rake’s Progress, Luca Francesconi’s Quartett and La Bohème.

Finally he was the assistant conductor of the Théâtre Royal de la Monnaie in Brussels (2014-2015). He has worked there with Ludovic Morlot, Kazushi Ono, Härtmut Haenchen, Daniel Kawka, Michael Boder and Frank Beermann.

During his musical journey he had the opportunity to work with conductors such as Bernard Haitink, David Zinman, Jorma Panula, Colin Metters, Nicolas Pasquet, Jin Wang, Manuel Hernandez Silva and Klaus Harp and to conduct the Tonhalle Orchester, the Luzern Festival String Orchestra, the Philharmonic Orchestra and the Monte Carlo Choir, the George Enescu Philharmonic Orchestra, the Orquesta de Cordoba, the Royal Camerata…

Antoine Glatard was born in 1984 and studied composition, piano and clarinet before devoting himself to conducting at the Koninklijk Conservatoriom Brussel alongside with Ronald Zollman and Patrick Davin. He obtained his Master diploma in 2012 with high distinction.